Following Tommy Steele, Billy Fury, King Size Taylor, Colin Hicks, Lee Curtis and Tony Sheridan, Germany’s Bear Family Records has continued their The Brits Are Rocking series with the one and only Vince Taylor. The compilation features thirty-two of Vince’s recordings from the late fifties to early sixties; is this latest entry worth picking up?

Vince Taylor is a name that was familiar to me before taking on this review. Initially, I wasn’t sure why. Upon research, his name often filters through, alongside Cliff Richard, Billy Fury and Marty Wilde, when discussing the early days of British rock and roll. Sadly, I had never heard his music. This compilation helped me to rectify that, and give context to other bits of research I have done. Despite not having a stage name that signified anarchic tendencies, (he was born Brian Maurice Holden) he was quite possibly the wildest of all. Backed by the Playboys, including an ever-changing lineup that featured Tony Sheridan and pre-The Shadows‘ drummer Brian Bennett, they made quite a name for themselves in Europe.

A Brit who moved to the States and back again, Taylor brought back with him an energy unseen on these shores at that point. It only takes a brief YouTube search to find the (frankly terrifying) clip of Taylor performing in his day. Black leather, chains and wild stage movements are just some of his performance tricks that make his contemporaries look tame in comparison. It is clear to see he took inspiration from Gene Vincent, even covering a fair number of his tracks; Many of them are included in this compilation.

The album begins with the song in which the album derives its name, Brand New Cadillac. The voice isn’t the strongest, but the delivery brings home the Eddie Cochran / Gene Vincent style vocal style. The guitar licks, played by Joe Moretti, are memorable and keep things rolling nicely. It is clear to see why this is considered his signature song. The other notable recording, Jet Black Machine, is another frantic rock gem that deserves more airtime. I love the energetic drums, catchy guitar line and Taylor’s enthusiastic vocal performance.

The highlight of these compilations, at least for me, is hearing a British performer putting their own stamp on a range of Rock ‘n’ Roll standards. To say Vince Taylor does this in spades is an understatement. His personality-infused renditions of Long Tall Sally, I Like Love, Sweet Little Sixteen, Shaking All Over, Ready Teddy, My Babe, Twenty Flight Rock, C’mon Everybody, Baby Let’s Play House, Rip It Up et al are a joy. Taylor occasionally strays into mimicry, but it doesn’t detract from perfectly working versions of these songs.

It is clear to hear many of these recordings have been sourced from the best sources available. Most, if not all, sound like they originate from the original master tapes. Any defects heard are more likely to be associated with the recording equipment of the era.

Inside a standard CD case, is a 36-page booklet containing extensive liner notes by Ashley Woods, detailing the life and career of Vince Taylor. It also features a comprehensive discography plus rare photographs and illustrations.

It may seem like bias at this point, but I cannot get enough of this series. Discovering forgotten British rockers like Vince Taylor is always a fascinating glimpse into the beginnings of British Rock and Roll. His first-hand contact with the American movement separates him musically, shown through his accent. vocal style and energy, making him a unique figure from this time period. Bear Family Records have compiled an album that celebrates this rocker, from all sides, and shines an overdue spotlight on his short-lived career. 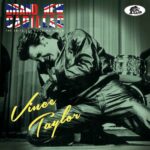 Thu Jun 30 , 2022
Fans of Julia Child have a new way to watch some of her classic shows, via a newly created YouTube channel! PBS Distribution has launched a new YouTube channel showcasing […]