Helloooo everybody, I mean everybody! Jamie Dyer writes about Bear Family Records‘ recent addition to their The Brits Are Rocking’ series.

The name Colin Hicks may not ring any immediate bells but has a unique place in British Rock ‘n’ Roll history. As the younger brother of Tommy Steele, he found himself a tad overshadowed in the UK, before finding success in Italy alongside various versions of The Cabin Boys. Thanks to the release of a new compilation, music fans can experience early Hicks recordings. Part of Bear Family Records’ expanding The Brits Are Rocking series of compilations, Colin follows previous albums of recordings by King Size Taylor, Billy Fury and (his brother) Tommy Steele. This album comprises 27 recordings made between 1957 and 1961, in both the UK and Italy; Is it worth picking up?

Having never heard of Hicks prior to this review, I was not sure what to expect. As with many listeners, the want to compare Hicks to Steele is strong. The voice may resemble his brother in some ways, but the overall delivery is different; Hicks opting for a much heavier style with less theatrical sensibilities. A regular feature of this series is the number of cover versions of American Rock ‘n’ Roll standards; This one is no different. Hearing Colin take on classics such as Oh Boy, Loves Made a Fool Of You, Whole Lotta Shakin’ Goin’ On, Blue Moon Of Kentucky (Great riff), Tutti Frutti, Twenty Flight Rock and Johnny B. Goode, is a joy. Even some of the lesser-known compositions, Sexy Rock, Wild Eyes And Tender Lips, Robot Man and Hanging Around, are a pleasant surprise. Overall, I am impressed at just how versatile Hicks appears to be; switching between uptempo Rock and ballads with ease.

A pleasant addition is the Italian sung Impazzivo Per Te, with the Tony De Vita Orchestra, a real rarity. According to the label, it “appeared in 1960 as a magazine supplement only on so-called Flexi-Disc”. The ability to unearth gems like this is how Bear Family continues to produce top-quality compilations.

The sound quality sometimes lacks the sparkle of previous compilations in this series but expected for some of the obscure material. While many of these tracks are available elsewhere, few other releases match the extra sparkle heard on this compilation.

Inside a standard CD case is a 36-page colour booklet, featuring an extensive write-up on Colin Hicks by Ashley Wood; alongside discography and rare photographs. This is a satisfying piece of writing, featuring interviews, reviews and other accounts of the story. The only disappointing thing is the unavoidable problem of the researchers being unable to access certain information during the recent lockdown, but this only affects things in a minor way.

Being the younger brother of Tommy Steele, Colin Hicks would always be subject to comparison. While they may share some phrasing similarities, the two take the same genre and go in two directions; As shown by the brothers both doing versions of Tallahassee Lassie and Giddy-Up-A-Ding-Dong. Overall, this is an impressive compilation featuring a comprehensive list of tracks that are a must for any fan of Hicks. A worthy addition to The Brits Are Rocking CD series. 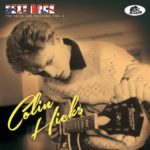 Fri Jun 26 , 2020
Hello and welcome to another edition of My Week In Vintage for Old Time Review. As things ease up in the actual world, my workload has increased. While this would […]