After the recent entries of Narvel Felts and Billy Lee Riley, Germany’s Bear Family Records are adding Link Wray to their established ‘Rocks’ series. Remembered for his instrumental hits ‘Rumble’ and ‘Raw-Hide’, this 34 track compilation celebrates the legendary guitarist’s work produced between 1958 and 1966.

As someone who only knew the most well-known material, a majority of the included tracks are new to me; a thrilling experience. ‘Raw-Hide’ and ‘Rumble’ are used to open and close the album with familiarity. The rest of the album’s contents, however, are not merely acting as a filler. Link Wray’s trademark crunching guitar sound could be mistaken for something twenty years its junior; a progressive mixture of distorted power chords and raunchy licks. The sound quality is a bit raw and loud on these recordings but helps to give it vibrant energy. Most of these tracks comprise the same structure, a simple motif with Wray letting rip on the guitar. Once you’ve heard Wray’s performances on ‘Deuces Wild’, ‘Hang On’ et al, you will wonder how they may have passed you by.

Alongside the many instrumentals are four vocal lead songs. Two are Wray’s brother, Vernon, performing under the alias of Ray Vernon. Although connected, they feel a little out of place amongst the hard-edged instrumental tracks. The two tracks sung by Wray (Ain’t That Loving You Baby and Mary Ann) are a revelation. Despite having one lung because of illness early in his life, Wray turns in vocal performances that would not sound out of place on a Rolling Stones record. The rasp quality to the vocals turns these Blues numbers into fully charged rockers, years ahead of their time.

A Little Something Extra

A release from Bear Family Records would not be complete without extras. Inside an attractive digipak is a 36-page booklet with detailed liner notes by Bill Dahl. There are also relevant photographs and illustrations, alongside extensive individual track information.

Link Wray’s inclusion in the prolific ‘Rocks’ series, deserved but long overdue. Often forgotten, these recordings should serve as a reminder of what a revolutionary musician Link Wray was; it rocks!. If you’re looking to discover his early work, look no further. 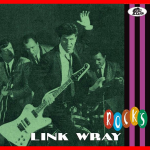