In this review for New Music, Vintage Style, Jamie Dyer writes about the debut EP of Singer-Songwriter Poppy Holiday, who delivers a slice of old-time flavoured magic.

Once upon (a slice of) time, there was a sound that filled dance floors across the world. During its heyday in the 20s, 30s, and 40s, Jazz was the genre of choice. While the genre has lasted in small forms, it is usually dismissed as nothing more than a novelty to modern ears. There are many artists out there looking to change this, and they are succeeding.

Poppy Holiday has been around for a little while, and has made waves in the world of music. Her debut EP A Pinch Of Patience released in 2015, featuring a song that has made her name. The opener, Happy, has seen usage in a variety of feature and short films. Although the songs (or song) have garnered fame, are they any good?

The brief answer is….yes! Poppy has a distinctive voice that calls upon a time and place, but with a modern eccentric twist. The EP opens with a catchy little track called Happy, which features a banjo played by Mike Harding. The track is bouncy and fun, the sort of thing you would sing along to in the car, but possibly not admit to liking. This reviewer has certainly fallen to its charms; I’ve been humming it all week. The second track, Singing In The Bath, maintains the Jazzy feel of the opener but takes it down a peg. Her vocals smooth out on the slower tracks, almost resembling a young Kylie Minogue in her tone. The third track, Sexy Man, is a slight departure for the singer; breaking the theme that has been consistent until this point. It’s a duet with a French male singer, who talks and sings over an accordion infused track. It’s obviously an attempt to do something different, with a clear European influence, but it breaks the flow a little. The last studio-recorded track of the EP is a sensual blend of Bossa Nova, Smooth Jazz, slow Pop, and gentle ballad; showcasing Poppy’s voice perfectly. The instrumentation of this recording is basic, allowing her unique voice to shine.

The EP also includes a live song called 21st Century Women, which features the same superb musicianship and vocal quality of its former tracks. Although it slightly lacks the shine of the studio, the sound clarity is still top-notch; a future live album of more raw recordings would be most welcome. Judging by the busy schedule that awaits Poppy, this has the possibility to become a reality!

Poppy Holiday may not be a name that is instantly recognizable, but her style is. Inspired by vintage Jazz and Pop sounds, UK based Poppy blends the two with a quirky and eccentric vibrancy. From the annoyingly catchy Happy to the slow and sultry Bus Stop Boy, a pinch of patience is a wondrous display of creativity.

A Pinch Of Patience by Poppy Holiday is available from Amazon.

A Pinch Of Patience - Poppy Holiday 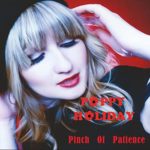 Wed Jul 22 , 2020
Talking Pictures TV has announced their intention to schedule regular broadcasts of the classic children’s TV show Runaround, presented by Mike Reid. Initially, it was to be just one episode […]