Like many Country music fans, my first exposure to Bobby Bare was through his memorable 1963 hit ‘500 Miles Away from Home’. The way he conveyed the story of that song always stuck with me and became one of my favourites. I always tried to experience more of his material but never knew where to start. Bare, after 60+ years in the music industry, has amassed quite a prolific catalogue of recordings that stretches across the decades. Past the hits, it is always difficult to know where to go next. Luckily, a new reissue of albums has helped me to continue on my musical journey of Bobby Bare.

BGO Records has added to their impressive stable of Country collections, with this set of four Bobby Bare albums made between 1977 and 1980. This era saw a change in direction for the singer, something incredibly clear in these albums.

The first featured album, Me and McDill, was first issued by RCA in 1977 and is an album of tracks written by Bob McDill. Bobby often championed songwriters outside of the usual circle, and this album acted as a showcase for McDill, who was fairly new on the Nashville scene. Lacking much of the humour and wit of his previous work, the songs seem to slide towards the adult contemporary genre that became common in the late 1970s. The laid back vibe is initially pleasant but can grate after a while. Bobby’s ability to tell a narrative is here, with much of McDill’s lyrics tending towards sentiment. Despite this uniform approach, there are one or two exceptions. The only song that was co-written with another writer, ‘Hillbilly Hell’, seems to be a tongue-in-cheek comment on the life of a Nashville musician; a stand out track.

“In the cold cold heart of Tennessee, there’s ten thousand dreamers just like me. With a song and a guitar, and a message to tell. Come to find heaven in hillbilly hell.”

Songs such as ‘Wilma Lou’, ‘If You Think I’m Crazy Now’, Don’t Think You’re Too Good For Country Music’ and ‘The Woman in Every Man’s Life’ are catchy slices of Americana, and are my highlights of this album.

The follow-up album Sleeper Wherever I Fall is a far funkier affair. The first album as part of a new deal at Columbia, the change in direction is initially startling. The album begins with the single ‘Sleep Tight, Good Night Man’, a radio-friendly track that sets the tone. What follows is an eclectic selection of tracks that mixes genres and does it surprisingly well. Awash with luscious electronic drums, synth and groovy guitar licks, Bare appears to spend the entire album experimenting with contemporary sounds. His interpretations of The Byrds ‘I’ll Feel a Whole Lot Better’ and The Rolling Stones’ ‘The Last Time’ are Pop infused records that sound almost futuristic and forward-thinking. The two bonus tracks seem like an odd inclusion, but they keep the vibe established by ‘Sleeper’ and somehow set the mood up for the second disc! They are taken from Bare’s 1983 album ‘Drinkin’ From The Bottle Singin’ From The Heart’ and could be a clue to future releases.

Disc two starts Bobby’s second album of 1978, Bare, which feels like an attempt to produce a pure Country effort. One of the best albums in the set, Bare really comes into his own here. Gone are the synths and funky guitars, and in sweeps a sound that finds an avenue between contemporary and classic Country. The presence of fiddles and prominent backing vocals elevates the songs to another level, complimenting the polished production. The first half jaunts along nicely, with a series of catchy songs, before slowing it down for the second. A highlight is the number ‘Greasy Grit Gravy’, which features guest vocalists including Willie Nelson, Waylon Jennings, Dr Hook and Shel Silverstein. Bare’s version of ‘The Gambler‘ is a catchy sing-a-long affair that, once again, shows his ability to make a song his own. The album ends with the fantastic earworm ‘Sing For The Song’, a tongue-in-cheek love letter to Country music from Silverstein.

The last collection included in the set is Down & Dirty from 1980. A live album it may be, but it is not the poorer cousin of the rest of the collection. Bare, along with a live band, perform in front of an enthusiastic live audience; who clap and cheer along to each track. A loud crowd normally hurts live albums, but it aids this one; enabling the listener to pick up on the vibe. It features a set of songs, written by songwriters including Kris Kristofferson, Bob McDill and Shel Silverstein, that Bare had rarely recorded previously. The album mixes things up with flavours of Country, Folk and Southern Rock; continuing Bobby’s period of experimentation. They released the recording ‘Numbers’ as a single, which followed Bare’s trend of releasing novelty tracks made in front of an audience. I consider this album to be a highlight of this collection and rounds things off nicely.

They have sourced these recordings from the master tapes, and it shows. Newly remastered by Andrew Thompson at Sound Performance in London, these tracks have possibly never sounded better. Having tested it on a PC through headphones and a 1980s Hi-Fi, the clarity was impressive.

Alongside the music, the presentation of this set is impressive. Housed in a smartly designed cardboard slipcase, the CD case has a nice sturdy build quality. The graphic design on the front and back cover displays things in a way that matches many other releases from BGO Records. Inside the booklet is all recording information from the albums, along with a detailed biography that covers most of Bare’s career highlights. Although mostly compiled from sources freely available on the Internet, it is nice to have it included in the set.

These four albums document a unique time and place and contain a mixture of highs and lows. There will be much debate about whether the set should have started from the Colombia years, but the first album helps to highlight the musical shift for Bobby. While this collection of songs may not be the greatest hits, the sheer eclectic nature makes this worthwhile. BGO Records have priced this collection at £9,99, which is a bargain for what it includes. The entire Bare album is worth the price tag alone! A great release worth picking up!

Sleeper Wherever I Fall

Me & McDill | Sleeper Wherever I Fall | Bare | Down & Dirty by Bobby Bare is available from BGO Records HERE. 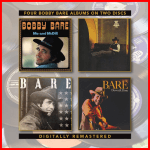 Sun Nov 3 , 2019
British writer and broadcaster Jamie Dyer writes about his week in consuming and discovering vintage related media. Hello and welcome to another edition of my blog on Old Time Review. […]