Eureka Entertainment are bringing one of the most revered western films of all time to Blu-ray for the first time in the UK. Starring Gary Cooper and Grace Kelly, High Noon is being released as part of Eureka’s Masters of Cinema series.

The iconic 1952 western opens with the wedding of Marshall Will Kane (Cooper) and Amy (Kelly). Kane is retiring today to start a new life with his Quaker bride. Just as they are leaving however, the news arrives that infamous killer Frank Miller is on his way. Kane’s friends convince him to stick with his plan and leave town, but he cannot go further than a mile or two before turning back: the town needs him.

Amy tells him that she will leave him if he doesn’t go with her. One by one all the friends he thought he had let him down, refusing to help. Feeling snubbed that he wasn’t in line for the Marshall job, his deputy Harvey Pell (Lloyd Bridges) quits. His friend and mentor, retired lawman Martin Howe (Lon Chaney Jr.) has nothing but discouraging words for him. Even his former lover, businesswoman Helen Ramirez (Katy Jurado), tells him to give up and leave town.

The story plays out in real time, set up from the start with interesting camera angles and a very atmospheric score from Dimitri Tiomkin. At the beginning of the film, there are around an hour and twenty minutes until Frank Miller comes on the noon train.

Suddenly as two minutes to noon comes, the mood rises and almost produces a physical reaction to the anticipation in the viewer. The feeling of jeopardy is really heightened. This has often been imitated in subsequent productions, but never so effectively as Director Fred Zinnemann achieves here.

The music ceases at noon, with only minute sounds heard against the backdrop of the train whistle. Mrs Kane and Mrs Ramirez set off out of town. Kane watches them leave, left alone in the street. Here the shot which has become a standard, with the camera pulling back to leave an ever decreasing Cooper in the expanse of the empty street, is used to great effect. The train pulls in with around 12 minutes of screen time remaining.

For anybody who hasn’t seen the film, I won’t spoil the ending. But as the end music fades down, it leaves you with a feeling of satisfaction rarely repeated.

Cooper’s performance is second to none, ably supported by Kelly and a strong turn from Jurado. She is a force as a character who holds a lot of weight with the men in town. Thomas Mitchell is another stand-out; wonderful as always and a very effective actor.

High Noon does not outstay its welcome. Despite the setting being a western type town with gun-toting bad guys and lawmen, this does not preclude anyone from watching and enjoying who is not a fan of the western genre. It’s not about the horses or the guns, but much more of a human story. There is none of the trademark humour here found in the best Western films. But this story does not need it.

Therefore, I will categorise High Noon not as one of the best Western films I have ever seen, but instead rank it among the top films of all time.

The added features here are about as extensive as one could hope for a film of this age. There are several featurettes, one of which is even hosted by Cooper’s daughter. A film of such lasting legacy and importance deserves nothing less, and it certainly adds value to this release.

The restored picture quality is excellent, with every detail visible. The characters’ expressions can be read minutely, which really aids the meaning of scenes with such fine and skilful acting. Performers such as Cooper, Kelly and Mitchell really stand out when the image is clear enough to fully appreciate the nuances of what they do.

High Noon is fully deserving of all its praise and recognition, and more. It is one of those rare films that does everything just right. Nothing is overdone, nor does it leave you wishing there had been more. A genuine masterpiece, given the loving treatment it deserves in this Blu-ray release from Eureka Entertainment.

Part of the Masters of Cinema Series, High Noon will be released on 16th September 2019. High Noon is available for pre-order from Eureka Entertainment or Amazon. 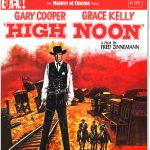 Fri Sep 13 , 2019
US TV station Buzzr has announced that they will regularly classic game show Split Second, hosted by Monty Hall. Forming part of a series of announcements for fall, this one […]