Captain Bob Hyde (Dern) and his wife Sally (Fonda) are preparing to say goodbye when we meet them first, as he is being deployed to Vietnam during the height of the conflict. She is mostly what those around her would expect her to be: the well behaved, understanding and supportive military wife. When left alone, she at a hospital for wounded veterans. She quickly encounters a wounded soldier, Luke Martin (Voight), in whom she takes an interest as she had known him in high school.

The story focuses primarily on Sally; how she deals with being alone initially, then her awakening to life after for veterans and their families, but Coming Home does not indulge too heavily in activism. While Sally takes her concerns to a committee of military wives, when they are not interested in helping the story settles back on the individual rather than making a cause out of what she has witnessed.

Her relationship with Luke blossoms and his recovery progresses. When Sally goes to visit Bob to spend his leave together, we see how separate they have become, but the film allows this to breathe, rather than making something overly dramatic out of their quiet awkwardness.

I must take a moment to say that, although Coming Home is by its very theme, anti-war, it does not strike a political tone or stance, but seeks to shine a light on the implications on individual lives. It doesn’t feel like a patriotic story, yet neither is it unpatriotic. It is simply human.

Coming Home does not feel sensationalist, but sensitive and honest. It would be unjust to put words like ‘painfully’ in front of those descriptions because there is nothing cliche or dramatic here. Nothing feels as if played for effect; other than to highlight the human side of war: something that is often impersonally glorified.

It felt like the pace would drag, but in fact, every scene was faithfully important to the story. At the end when things could have become needlessly violent and intense in deference to audience excitement, an almost calm continuance played us out saying that however agonising and unrecognizable it may be, life would continue somehow. unsure as to what turn events may take, which mirrors the uncertainty for those returning from any and for their families.o u ott o p o o po ﻿

This Blu-Ray release has a pleasing amount of extra material in the set:

Considering the fact that Fonda, Voight and the screenwriters (Waldo Salt & Robert C. Jones) won Academy Awards for their contribution to this film, it is wonderful to see so many special features included; allowing the viewer to read, and hear the stories behind this complicated classic.

There has been so much written about the Vietnam war in particular, and so much controversy and high feeling, that it is unnecessary to comment on the effect of any morality running through the film. Perhaps in part, because anything of that nature is so well written, thought out and acted that nothing feels like a lesson or cause. Nobody is standing on a soapbox or banging a drum. Coming Home isn’t actually about politics; just the opposite: it is about people. But even more personal than that, it is about a small , and how life really is for them, regardless, because of and despite all that is going on outside.﻿

Coming Home is available to pre-order from Amazon. 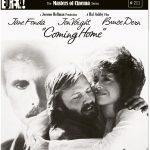 Fri Jul 5 , 2019
1970s British TV series Rooms is set to return to our screens this July 2019, on archive channel Talking Pictures TV. Not seen on British TV since its original run […]