They are the entertainers who gave us joy over many decades, through the mediums of radio, television and film. Their careers took them to all kinds of places, even some avenues that have been forgotten. Many acts released music albums to cash in on their popularity and add another string to their bow, some more successful than others!

Thanks to Spotify, some of these gems can be unearthed; if you look hard enough. We have been searching the vast archive of the music streaming service, and have found a few gems…

One of the most unsurprising entries to our list is this 1969 LP from comedy legend George Burns. The singing of Burns was always part of his act, but mainly used as a device for ; especially during his radio years with wife Gracie Allen.

This album is a mixed bag, with a mixture of standards and ‘contemporary’ numbers. Hearing George croon his way through versions orchestrated versions of Harry Nilsson 1941 and Beatles favourite ‘With A Little Help From My Friends’ is a little surreal, but it strangely grows on you.

Featured Song: With A Little Help From My Friends

Dick Van Dyke is an international treasure, adored by generations for his work in TV and film. It is a known fact that Van Dyke can sing, but his work in recorded music has usually been limited to soundtracks and the occasional collaboration album. This album is something of an oddity, but a good one.

Recorded at a height of his TV fame in 1963, this album is exactly what it appears to be. Van Dyke croons his way through a set of standards including ‘Put On A Happy Face’, ‘My Baby Just Cares For Me’ and ‘Nice Work If You Can Get It’. Ably backed by Enoch Light and his Orchestra, the arrangements are classic Jazz and swing with some modern influence. It almost feels like an album from the late 40s, especially with the addition of The Ray Charles Singers to the mix.

The fact that he wouldn’t release another solo album until 2017, should not be a deterrent. It is worth remembering that a year after this venture, Mary Poppins was released, so maybe Dick was too busy for a follow-up.

Featured Song: Nice Work If You Can Get It

British entertainer Bruce Forsyth is another performer who was known to be a but did not make it known much on record. This effort from the early 60s is one of the best examples of his musical talent.

Released at the height of his fame as on Sunday Night At The London Palladium, the album is a delightful Jazzy example of his various talents. It features a number of standards including ‘That’s Entertainment’, ‘Pick Yourself Up’ and ‘When I See An Elephant Fly. Backed by the Alyn Ainsworth & His Orchestra, Bruce croons, tap laughs and sings his way through the selection; each with a high level of professionalism.

Every song is performed with an evident smile and sounds like a man in his element. Well worth checking out.

Please note: We used a vinyl cover as the digital covers do not do the album justice!

Featured: Pick Yourself Up

4) Jimmy Durante – At The Piano, In Person

Don’t let the hideous modern cover art put you off, this is vintage Durante at his finest. Originally released in 1959, this LP found Jimmy in fine form. Accompanied by nothing more than his own piano and a light dusting of percussion, Jimmy delivers a set of familiar musical numbers that will have you singing, humming and laughing along.

Most of the tracks are predominantly instrumental but often punctuated with bits of commentary from Jimmy. It gives the feeling of sitting at a piano with the man himself, being serenaded. His occasional comments are often humorous and sound spontaneous.

There are many of Jimmy’s original albums available on Spotify, but few match the simplicity and timeless quality of this album. The jaunty old-time music hall delivery with Durante’s unmistakable vocals, make this an enjoyable listen.

Horrible cover art strikes again, as we present the last album in our list. This is one of the hardest to describe, as it has to be heard to be believed. Those familiar with Benny Hill, will know the type of humor he revels in!

Each song is a parody of something else, and it’s utterly charming. Benny’s lyrics are occasionally non-PC by today’s standards; don’t let that put you off.

Released in 1965, it’s fair to say that some of this album has not aged well. If you can ignore the production and slight absurdity of the lyrics, you’ll love it!

Have you heard any of these albums? What are your favorite albums by an Old Time Entertainer?

The Big Bopper - Re-evaluating the legacy

Fri Mar 8 , 2019
Helloooo Baaaby: Why I think the Big Bopper’s legacy shouldn’t be forgotten. February of 2019 marked the 60th anniversary of the tragic plane crash that killed three performers from the […] 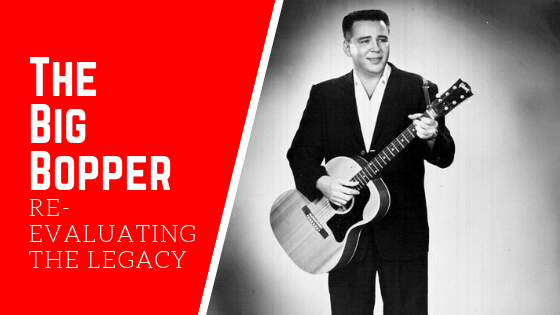