JOKER! JOKER! JOKER! The iconic words associated with one classic game show the game show where knowledge is king and lady luck is queen. The Joker’s Wild!

The Joker’s Wild was produced by Barry & Enright Productions. The show was first piloted in 1968 hosted by Allen Ludden. It was hosted by Jack Barry when it went to series on CBS. The show debuted alongside The Price is Right and Gambit on September 4th 1972 and would remain until June 13th 1975. The show was revived in syndication on September 5th 1977 and remained until May 23rd 1986. Since then the show has had two revivals since then; once in 1990 and most recently in 2017.

The game involves a slot machine usually filled with five categories and the “Joker”! Two contestants one usually a returning champion. The machine featured three windows with one category or joker being randomly chosen out of the shuffle. If three different categories showed up the contestant had the choice to play any of them for $50. If the same was in two slots it was worth $100, and $150 if all three were the same. (Later $200) Jokers were in all three slots and were like “wilds” which means that they could be used for any of the categories in the game. Originally, if all three Jokers appeared it was an automatic win but later changed to where the contestant had to answer a question correctly to win. The goal was to be the first to reach $500. Doing so would win the game and the championship and would move on to the bonus round.

Originally in the CBS run, there was a Joker’s Jackpot were a contestant must win 5 games in a row (later 3). The jackpot was originally $2500 and whenever a player lost their main game prizes it was put in the jackpot. The winning player then had the option to go for the jackpot or keep what they had and leave. Winning the jackpot would later feature winning a new car. This was soon retired with the introduction of “Face the Devil”

The show had 3 different bonus rounds. One which lasted two episodes and the other lasting not much longer. Face The Devil is the one that everyone remembers the most and established the classic hit “X” or “Y” before hitting “Z” formula. Categories were replaced with cash from $25-$200 and the “jokers” were replaced with the iconic “DEVIL”. The goal of the bonus round was to accumulate $1000 before landing on the “DEVIL” and losing all the money won in the bonus game. The contestant had the opportunity to stop after every spin or keep going and risk the money. If the contestant spun three of the same dollar amount it was a “natural triple” and the contestant automatically won $1000.  Winning the bonus game would also win a prize package.

The host that almost everyone associates with the show is Jack Barry. Barry was on a comeback when the show first premiered in 1972 after the aftermath of the quiz show scandals in the 50s, which lead in the first regulations and prevented game shows from rigging contestants; this incident almost destroyed the whole television industry. Although Barry was one of the people who pitched the show, the network was against him hosting the show and would’ve given it to Ludden; If he wasn’t contracted to the 70s revival of Password at the time. Other hosts such as Bob Barker, Wink Martindale, and Tom Kennedy were even considered, but Barry would get the job and this is Barry’s best game show; he was fast-paced and really rooted for a contestant to win. It was almost like he produced the show just for him to host, which I think was the case. However, tragedy struck one day in 1984 when Jack Barry suffered a heart attack while jogging. He passed away on May 2, 1984. Barry’s original replacement was slated to be sub-host Jim Peck, who filled in for both Jack and his successor but Enright gave the nod to the “dean” Bill Cullen. Cullen had hosted 23 game shows, this would sadly be his last one with the show officially ending in 1986.

The Joker’s Wild is a strong show with an easy to follow format and has a large fanbase. It also has an interesting bonus game This is a show that you can pick up and watch without seeing a previous episode, and know how to play. While it had a lot going for it, the show was kinda doomed after Barry’s untimely death. The pace had slowed down considerably, as the average Barry game would take about 8 minutes. Cullen’s games, would more often than not, take two episodes to complete his hosting style. The Joker’s Wild was kinda cheap when compared to other shows, who were giving away tens of thousands of dollars. It barely passed $9,000, even when they would give away a car. Cullen was also getting up there in age and it affected his performance, There was once an instance where Peck filled in for Cullen, they actually ran out of questions and had to stop taping to write more. Also, I found some of the question writing to be very easy for the show, it’s not a dealbreaker but it would’ve been nice to see more difficult questions. That shouldn’t stop you from watching the show as it is arguably the best Barry-Enright show and one of the Greatest Game Shows of all time.

All Of Father Knows Best Now on Amazon US

Sat Aug 10 , 2019
Shout! Factory have continued their recent additions to Amazon Prime US, with the arrival of the complete six seasons of ‘Father Knows Best’; now available to stream. Although the first […] 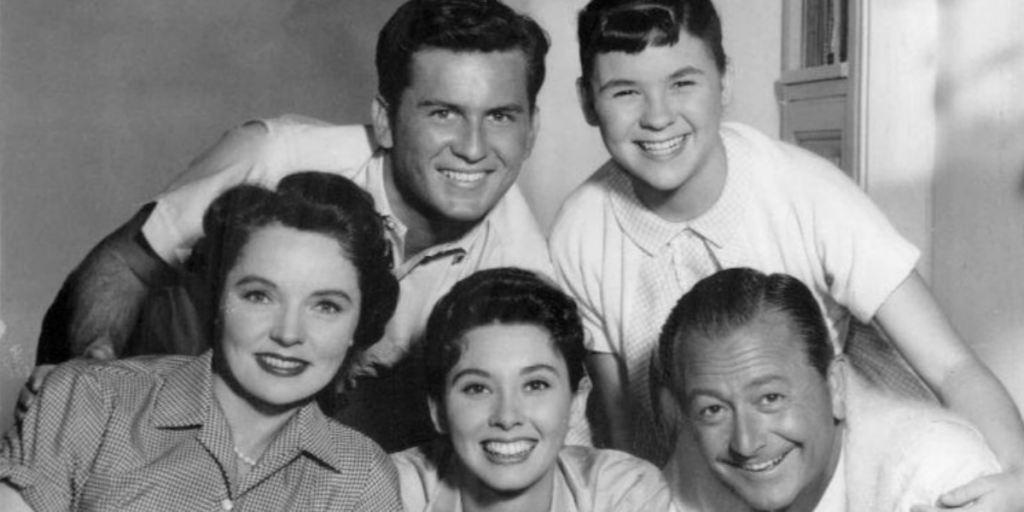