Word games have been a huge part of game shows and always will be. Ever since their prominent introduction to the genre in the 1960s, there has pretty much always been at least one word game on television; whether in rerun or a new show. Our game today uses a Word Search element and that show is Now You See It.

Created by Goodson-Todman Productions, Now You See It featured contestants trying to solve questions using answers shown on a 4×14 grid. This show would feature two lifespans in the US with Jack Narz hosting the first version from April 1, 1974, to June 13, 1975, on CBS, and a three-month revival in 1989 with Chuck Henry at the helm also on CBS. We’re going to focus on the Narz version for this review.

The Narz version used two different formats during its run. The first involved five players, one was a returning champion who would sit in the ‘Champion’s Gallery’ above the players until the finals. The remaining 4 contestants would be divided into two teams, which were determined by a lot. The players on the outside would then turn around so they couldn’t see the board. Each player had a responsibility as Narz would ask a question with the answer being on the grid of letters. The inside player’s job was to name the line the answer on if correct the outside player would turn around to say what position the word started at and the word itself with correct answers being represented by the line & position number (ex line 3, position 4 would be 7 points). This would continue until halftime hits and that’s when the players would swap places and it would keep going until the round ends with the team with the most points moving on to the semifinals. After the 100th episode until the format change, the contestants could write a bonus word on an index card and if their bonus word showed up as one of the answers, they would receive an additional ten points.

The winning teammates would now play against each other with the winner facing the champion in the finals. Narz would give a clue and the letters would show up one at a time until they revealed the last letter. The goal was to be the first person to get four words doing so, got you to the finals.

The winner now faced the champion in the finals. The finals played just like the first round except the contestant that buzzed was responsible for both line and position with whoever has the most points at the end moving on to the solo game for a cash jackpot. (Bonus answer was also in effect here.)

The winner now played a game over at Narz’s podium. The winning contestant now faced a 4×16 board where the contestant tried to get 10 answers in 60 seconds, doing so won a jackpot of $5,000 which increased by $1,000 every time not won.

After 185 episodes, they changed the format, as 3 players now competed. As a result, the first round was dropped entirely, and the game started with the two challengers at the semi-finals. Now played until five points and the finals played the same, except whoever reached 50 points would now cause all the other questions to be doubled until someone reached 100 points; which would win the game.

They gave Jack Narz the helm for the show’s brief run and he does a great job with it. He keeps the game flowing well and brings a sense of calmness to the show, which works for a show like this. He can also be seen hosting Concentration, Beat the Clock, and certain episodes of Tattletales, The Price is Right during Cullen’s tenure, and Password Plus.

Now You See It is like having a bowl of vanilla ice cream, not terrible but not super great. What the show does good is good; like its presentation and Jack Narz hosting. Then there are elements, like the scoring in the first round and finals, as certain words can be 7 points and have six letters and others can only have 3 and be worth 13 points which isn’t a good structure. The format change not long in its run usually isn’t a good sign for any game show. I also don’t understand why the solo game board is 4×16 and the main game board is only 4×14, especially in the main game where the points are based on line and position those extra points could’ve made a difference. Overall, it’s an average show and can be very enjoyable to watch, but nothing really stands out about it.

Mon Feb 3 , 2020
On February 3rd 1959, a tragic plane crash killed three performers from the era. Eventually known as ‘The Day The Music Died’, it claimed the lives of the pilot, Buddy […] 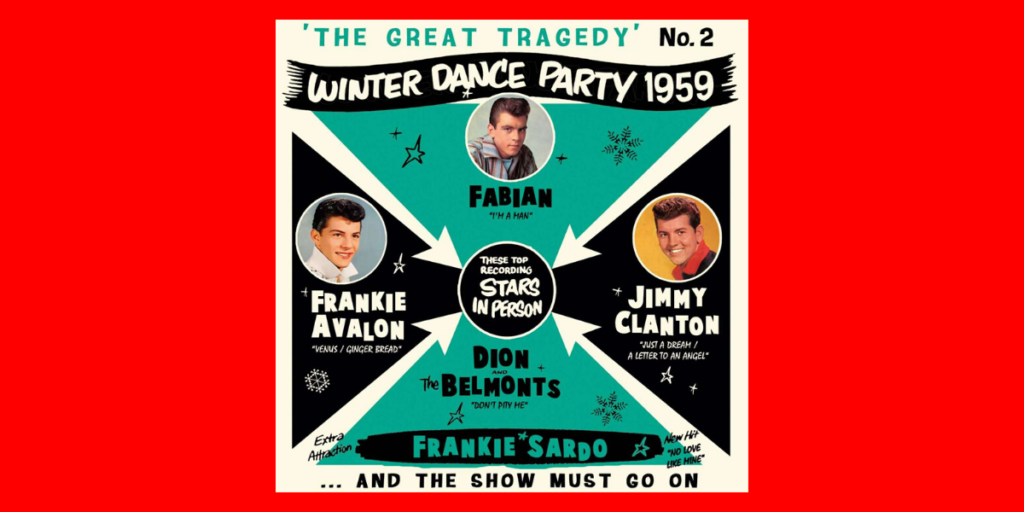